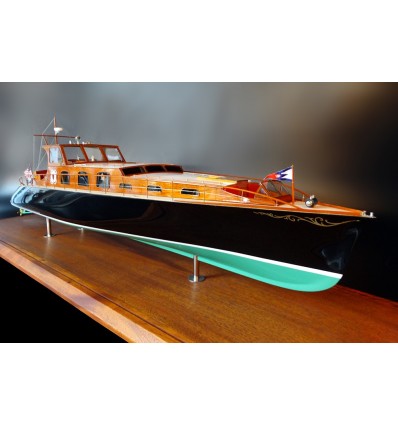 Like the goddess of love, beauty, and pleasure she was named after, Aphrodite, a 74' commuter yacht built in 1937 and rebuilt in 2005, can sweep you away.
From: http://usharbors.com

A little bit of history, from Brooklin Boat Yard:

APHRODITE was built by the Purdy Boat Company and launched in May of 1937 for Wall Street financier and later Ambassador to the Court of St. James, John Hay (Jock) Whitney of Manhasset, Long Island.

Best described as a “Commuter Yacht”, this elegant and sleek 74-footer would each morning whisk Mr. Whitney from his large two-story boat house westward down Long Island Sound and thru the East River to his Wall Street office. During the 45 minute commute Mr. Whitney would go up to the forward cockpit and read the Herald Tribune to catch up on the day’s news.

APHRODITE’S guest list over the years reads like a “Who’s Who” in the worlds of government, business and entertainment with such luminaries as Fred Astaire, Sir Laurence Olivier, Spencer Tracy, Katherine Hepburn, Henry Ford II, FDR advisor Harry Hopkins and Nelson Rockefeller aboard for summer day cruises down Long Island Sound. APHRODITE also once served as the site for a birthday party for Shirley Temple.

The day after the attack on Pearl Harbor, Mr. Whitney offered APHRODITE to the government for war service and she was commissioned in April 1942 as a Coast Guard auxiliary vessel (CGR-557). The boat spent most of its war-time career ferrying dignitaries up and down the Atlantic coast and transporting President Roosevelt to and from his home at Hyde Park on the Hudson River.

Abordage built the model which comes in a mahogany display case, scale 1/18 for a length of 50 inches.