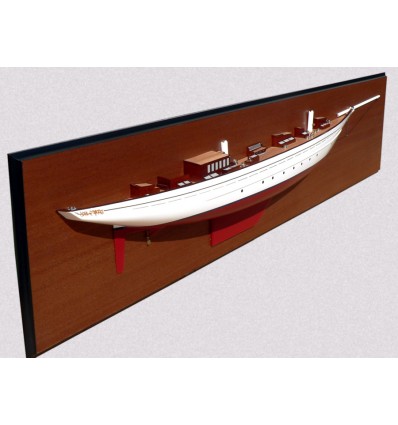 Adela is a "big class" schooner, fore-runner of the J-class America's Cup class. She was rebuilt with a combination of traditional materials and modern technology, including cutting-edge lightweight sails, to produce an elegant and yet fast classic yacht. She left the Pendennis yard from her latest refit in May 2006.

The design challenge presented by Adela was to incorporate every conceivable modern Yacht system and convenience into the original interior without losing the charm and elegance of the original W.C. Storey design.

Today, Adela cuts a classic profile blending traditional fittings with modern technology within her sumptuous interior as well as on deck. Custom made blocks and winch, concealed state of the art communications and a modern climate control system all provide the comfort and convenience one would expect on a modern superyacht. In 2000, Adela returned to Pendennis for lengthening work undertaken to the designs of German Frers.

The schooner ADELA was built in steel/timber composite in 1903. Designed by W.C. Storey and built by J.G.Fay & Co of Northam, Southampton, she represented as was then called in the yachting press 'one of the finest schooners afloat'. Apparently she was a good yacht which was awarded by winning the Kaiser's Cup, shortly after launching. Her construction was heavy duty and her interior accommodation represented the best available in those days. Many interesting details went into her interior design. ADELA was used by her owner, Mr. Claude Thornton Cayley, for extensive racing and cruising till the outbreak of the war in 1914. In 1924 Sir Henry Seymour King bought ADELA and renamed her HEARTSEASE. At this time the rather baroque, dark mahogany panelled saloon was replaced with the much lighter coloured sycamore wood, combined with fabric panelling. In 1933 an 87 HP Gardner diesel was installed, with a chain drive to an offset propeller. Sir Seymour died in that year and since then HEARTSEASE has had a number of owners, but her sailing days were gone.From 1937 till 1950 the yacht was laid up in a mud berth at the Aldous Shipyard in Brightlingsea