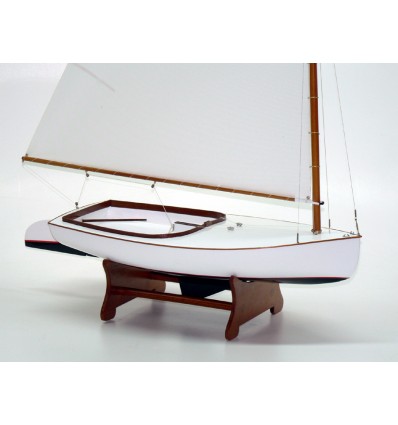 The Beetle Cat is a 12 foot, gaff rigged, wooden sailboat first built in 1921 by the Beetle family of New Bedford, Massachusetts. They are dedicated to preserving the art of traditional Plank-On-Frame wood boat construction using the highest quality of materials and craftsmanship.

A Beetle Cat is a 12-foot-4-inch (3.76 m) catboat first built in 1920 in New Bedford, Massachusetts by members of the Beetle family. Over 4,000 have been built. Beetle, Inc., now in Wareham, Massachusetts, is the sole builder of Beetle Cat boats. Famous owners include or have included Senator John Kerry, Jacqueline Onassis, who had one shipped to Greece in 1969 for John F. Kennedy Jr. and Caroline Kennedy to learn sailing in, Steven Spielberg and Calvin Klein.

The Beetle Cat is named after its designer, John Beetle, who drew the lines for the pleasure boat in 1920. The 12-foot-long (3.7 m), gaff-rigged boat's design was based on the 20-to-30-foot (6.1 to 9.1 m) catboats used for shallow water fishing along Cape Cod. With interest in the Beetle Cat and the demise of the whaling industry, the family shifted production to the Beetle Cat boat. During World War II, all production of the Beetle Cat was suspended.

The craft is a wooden class boat used for racing purposes, and a beach cruiser and family sailer (the craft can be launched from a sand beach as well as from a dock or boathouse lift). Although Beetle Inc. is the sole builder of new Beetle Cats, other specialty boatyards such as the International Yacht Restoration School refurbish Beetle Cats with the objective of training and preserving traditional boat building methods. From Wikipedia