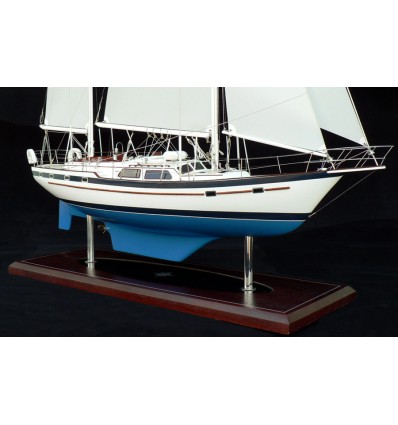 The boat that started the big boat deck-saloon revolution. The Irwin 52 was a trend-setting boat. It was a deck-saloon cruiser before there were deck-saloon cruisers. What’s more, the Irwin 52, with more than 250 hulls launched, may be the most popular big boat, 50-foot-plus, ever built. These beamy ketch-rigged cruisers offered no apologies for their motoryacht-like interior accommodations, spacious cockpit, wide side decks and raised bulwarks. It boasts of good performance under power as well as sail. Hmm, come to think of it those features sound awfully familiar? When you take a look at many of today’s larger cruising boats, it seems that Ted Irwin was a visionary.

Ted Irwin was an enigma in the industry. He was a designer, builder and world-class sailor, and during the early 1980s, his company was the largest privately owned sailboat firm in the country. He sold a lot of boats, especially big boats.

Launched in 1976, the Irwin 52 caught the sailing world off guard, suddenly it was possible to own your own small ship.

Irwin 54 half model with cabin and cockpit only