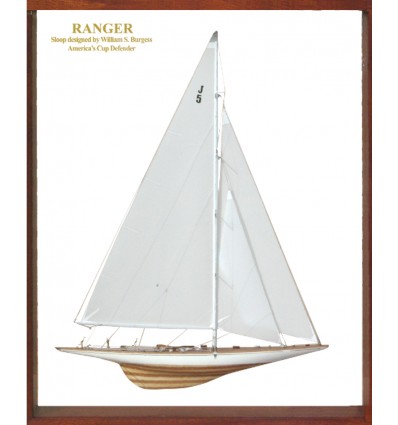 Framed Ranger Half Model with Sails.

This framed Ranger is very easy to handle and will highlight your living room. Made of Brasilian Mahogany and Plexiglas it stands up to the passing centuries and protects from dust. A very good investment that will not disappoint you.

No customer reviews for the moment.

There was a crowd in attendance at the launch of the third America's Cup defender designed and built by the Herreshoff brothers. As ever, the boat has been built in an utmost secrecy, forbidding the access of the yard to every journalists and photographers. This time the defender helm was put in the hands of Charles Barr. This was the first time that the famous Scottish skipper, living in he States for some years , had been entrusted with a defender. Captain Nat  was to be his co-skipper.

As John Brown predicted, Columbia's steel mast broke after the first trials, due to electrolysis. It was replaced by another in Oregon pine for the rest of the trials. The final race was held on October 20th. The struggle was hard and none of the two teams managed to take a decisive advantage till the last mark. The two were now both fighting against the wind. They heeled over impressively, stemposts dipping into the spray and lifting immense cascades of water.Throughout this first windward beat, Archie Hogarth tried all he knew to escape Columbia, who was controlling him mercilessly. Columbia obviously cut better through the choppy sea, whereas Shamrock had to force her way through and tossed violently the Defender flying her mainsail, staysail and jib, performed marvellously and hauled the wind without losing speed, her sais always full. Scarcely 5 minutes after rounding the mark, Columbia had the race in her pocket. Shamrock tacked first after 20 mninutes, followed the Americans. The difference separating the two yachts could now be seen, since, from the same initial point, Columbia was already 1/8 mile to windward of the Irish. Barr decided to slacken off to avoid breakages and to make sure of victory, as he was a quarter of a mile to windward of his pursuer, and won easily.

The American skipper and the defender had fulfilled their contract, with their three crushing victories over Sir Thomas Lipton's yacht. Columbia had no difficulty in beating Sir Thomas Lipton's Shamrock, designed by Fife Jr III. Before his promise to come back to the following America's Cup, Sir Thomas Lipton paid tribute to his rival: "Mister Herreshoff has shown that he is the greatest yacht designer in the world".

3 other products in the same category:

We use cookies to ensure that we give you the best experience on our website. If you continue without changing your settings, we'll assume that you are happy to receive all cookies from this website. If you would like to change your preferences you may do so by following the instructions here