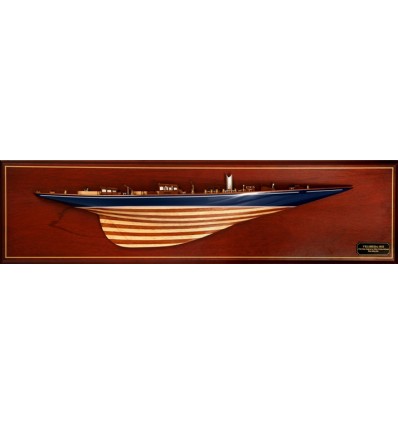 Built at Camper & Nicholson Yard at Gosport for W.F. Stephenson, Velsheda was launched in 1933 and christianed of the name of her owner's three daughters: Velma, Sheila and Daphne. Velsheda never sailed in American waters,but only challenged British trophees. In 1933, she was the real star of the season,Winning 20 of the 43 regattas.

Her fame came also from her numerous victories on Sir Thomas Lipton Shamrock V in the competions. After numerous glorious seasons, she languished for years. Velsheda which had been used previously as a houseboat in this time, was returned to sailing form in a highly authentic, though low budget project in the 1980s. Her glory days are back, however, courtesy of a 1997 refit that added a steering cockpit, a second deck-house and carbon fiber spars. Velsheda 56 metres high mast carries 839m2 (9,034ft2) of sail area upwind and her largest spinnaker is 1,010m2 (10,871ft2). Below decks, she has an elaborate period-style interior.

In 1999 the two former cup challengers ended their lonely duels when Velsheda joined them in Antigua for the first real J-class racing since 1937. Oddly, the Js were never conceived as yachts to last through the ages. As the ICAYA maxi yachts of their day, they represented the state-of-the-art in racing craft, designed to be replaced after a season or two. The staggering beauty and elegant low hulls, 160-foot-high masts and their remarkable power under sail have led to the most improbable end of all their rescue and reverence some 60 years hence.

12 other products in the same category: