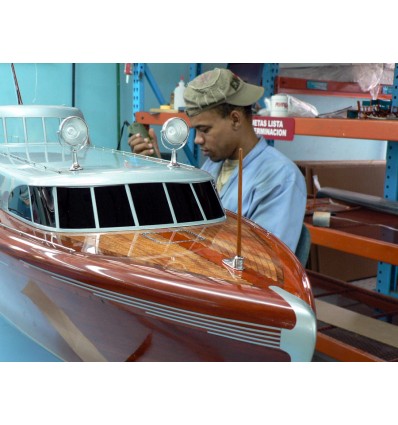 There is lots to be said about the THUNDERBIRD, which is a 55 foot express speedboat designed by John Hacker and built by Huckins in 1939 for Captain George Whittell, a reclusive millionaire who owned most of Tahoe's east shore at the time.

She was launched on July 14, 1940 at Tahoe Boat Company, where she still lives, and was kept in a boathouse specially built by Whittell. THUNDERBIRD was originally powered by twin Kermath 550 hp engines.

After Whittell broke his hip late in life and refused surgery to repair the fracture, he ended up confined to a wheelchair and unable or unwilling to use the Thunderbird. Suspended by slings in the boathouse for most of the last 10 years of his life, the boat was rescued by casino magnate (and Whittell protégé) William F. Harrah, who purchased it from Whittell in 1962. Harrah had it transported to his Automobile Collection restoration shop in Reno where it was reverentially refurbished. His workmen added a matching, brushed stainless steel flying bridge and replaced the original Kermath engines with two V-12 Allison aircraft engines, each developing 1100 horsepower. Harrah used it as his private yacht for the entertainment of his casino high-rollers and showroom headliners, such as Tony Bennett, Sammy Davis, Jr., Frank Sinatra and Bill Cosby, to name a few. The boat was returned to Reno every winter where the mahogany hull was meticulously sanded down to bare wood and refinished with ten coats of varnish!

Ownership of the yacht was recently transfered to Foundation 36, a non-profit organization dedicated to preserving and protecting Nevada's natural, cultural, and historic treasures. The yacht will now remain berthed in its original boathouse at the Thunderbird Lodge and can be viewed during tours of the estate.

A custom made replica

Abordage has built more than 3,000 custom boat models over the past 30 years with even more satisfied owners worldwide.
Our crew has great experience in building custom boat models for Private Owners, Yacht Designers and Shipyards.
Model of any vessel, from any period can be commissioned thanks to our long experience building one of a kind custom models.

Do not hesitate to contact us for a Custom Quote