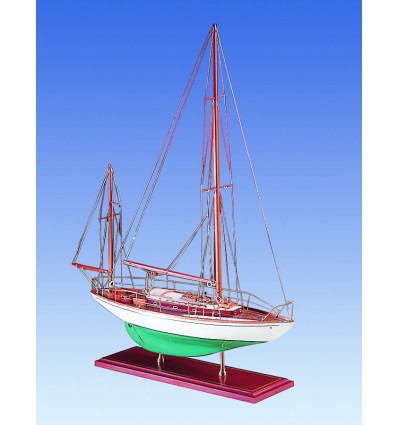 Hull has white top side and green bottom paint with a black cove stripe.

The deck is planked as a Teak deck with black joint.

The Concordia yawl was designed in 1938 by naval architect C. Raymond Hunt with input from Llewellyn and Waldo Howland, Clinton Crane, Fenwick Williams and Frank Paine.

Earlier that year Llewellyn Howland's family's Colin Archer designed Norwegian pilot cutter, Escape, was destroyed by the Great Hurricane of 1938. Llewellyn commissioned the Concordia Company, which he had founded in 1926 and at the time run by his son Waldo, to design and build a replacement. Llewellyn wanted a sailboat that could be used for both cruising and racing and withstand the heavy wind and choppy waters of Buzzards Bay.

What was created was Concordia design number fourteen, a 39'10" yawl that would become one of the most successful yawls in history. There were 103 Concordias produced between 1938 and 1966, making the Concordia yawl class the largest class of large one-design wooden sailboats.The first four Concordias were produced in Massachusetts. Concordia commissioned the Abeking and Rasmussen shipyard in Lemwerder, Germany to build the last 99.

All 103 Concordias are still in existents today.

10 other products in the same category: