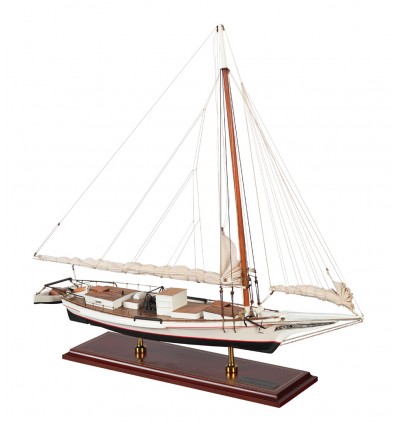 Mr. Webster defined a Skipjack as a blue fish, or other kind of fish that leaps out of, or play at the surface of, the water, but the origin of the word as applied to the V- bottom Chesapeake Bay sailing oyster dredge boat unknown. The name seems to have been associated with the development of the V- bottom craft in general.

The V- bottom Skipjack was development from flat bottom skiffs and boats around the Chesapeake bay in the 1880’s intensive development of that type occurred in the southern countries on the eastern shore of Maryland, and the bay was soon credited as being the home of the V- bottom. At the peak of building, around 1910, there where some 2,000 Skipjack sailing the bay.

The Skipjack evolved because it was simpler and less expensive to construct than a round bottom boat like a bugeye. The hull structure on most Skipjack is fairly typical but since no construction plans were used there were slight variations. Another noted characteristic of the Skipjack as well as many other bay sailing craft is the clipper-type bow with its long cutwater stem, hogged bowsprit, and decorative trail boards. The Skipjack is the last sailing craft developed on the bay for commercial operation. While the large early fleet has dwindled to about 39 remaining boats they are still operating for a good reason.