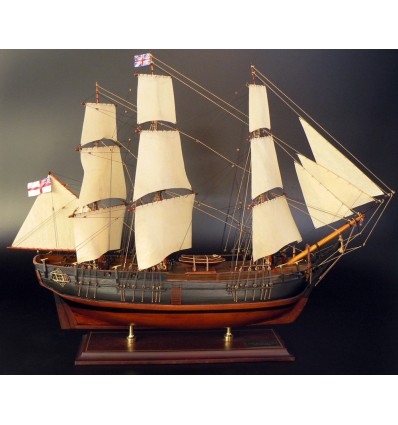 The Bounty is the ship at the heart of probably the most famous mutiny in history, the subject of five major films (so far), and over 2,000 articles and books.

This museum-quality ship model by the skilled artisans at Abordage captures in intricate detail this most famous theatre of insurrection, and fires the imagination to think what life on board would have been like, to lead to the dramatic and well-studied confrontation between William Bligh and his mate Fletcher Christian! Originally built as the collier Bethia, before being commissioned by the Royal Navy, converted for a special mission to the south seas, and renamed the Bounty, this small ship was home to an all-volunteer crew of 46.

The mission was to take over 1000 breadfruit plants from Tahiti and to introduce them to the Caribbean, where it was hoped that they could be a cheap food for the slave populations. After nearly 6 months in the near paradise of Tahiti, the return to the harsh realities of life on board ship was probably compounded by the extra limitations on space necessary for the plants, and tempers snapped. Bligh and 18 others were cast adrift, and the remaining crew under Fletcher Christian returned to Tahiti in the Bounty.

Many of them, with some Tahitians, then continued on to the remote Pitcairn island, where their descendents still live to this day. The Bounty itself was burned at Pitcairn by the mutineers, although remnants from the original ship still exist today. But this most famous ship has been reproduced as a sailing ship, and the Abordage scale ship model invites comparison in its attention to detail and the quality of its construction.

Plank-on-bulkhead construction, with waxed marine-brand rigging, the above photograph shows the quality and intricacy of the fittings, and evokes the contrast between the compactness and small scale of the original ship itself, and the enormity of the events which took place on it!

11 other products in the same category: