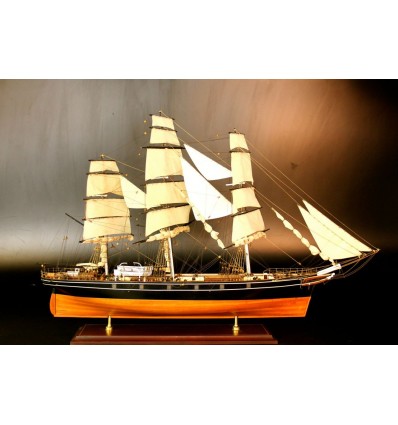 A museum-quality model of the last and most famous of the tea clippers, the most glamorous merchant ships ever built, and the fastest sailing ships of the 19th century. Built in 1869, at the transition point between sail and steam, the Cutty Sark could still outperform the powered ships that in the end replaced her.

This plank-on-bulkhead ship model captures the sleek lines and appearance of the original teak hull, built over a wrought iron frame for a composite construction that was revolutionary at the time. The Cutty Sark was deliberately chosen for preservation, and is now one of the most famous landmarks in London, located at Greenwich, a centre of naval tradition, with Wren's magnificent Naval College and the Royal Observatory, through which passes the Greenwich meridian, itself born of maritime needs.

The above photograph of the bow shows the attention to detail and quality of materials and workmanship by the skilled artisans at Abordage, while the main photograph shows the intricacy of the waxed marine-brand rigging, as well as the faithfully-reproduced, built-for-speed lines of her teak exterior hull.

The Cutty Sark herself is currently under restoration, to preserve her radical composite construction. Shortly after this started, sadly she was damaged by an accidental fire, although thankfully after her rigging and fittings had been removed. This magnificent model shows her as she was when restoration began, and will be once again at its completion. The care shown in the construction of this scale model mirrors that being shown in the reconstruction of the original, a loving and faithful recreation of the ship that has become the epitome of the most romantic era of merchant sailing ships.

11 other products in the same category: