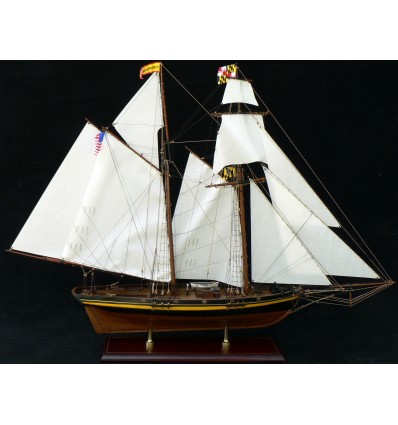 In early 19th century America no other type of sailing ship better captured the spirit of a young nation than Baltimore Clipper. These small fast ships were developed in the northern Chesapeake as foretopsail schooners, which carried 8 to 10 guns.

As privateers, they completely out-sailed the British navy during the war of 1812.

In 1974 Baltimore city officials decided to build a replica of a 19th century clipper to serve as a goodwill ambassador for the city. The ship, named Pride of Baltimore was launched at Baltimore’s Inner Harbor on February 27, 1977.The name captures the spirit of the phoenix-like town. She was lost at the sea during a hurricane on May 14, 1986. The city commissioned a larger sister-ship, and the Pride of Baltimore II was launched on April 30, 1989.