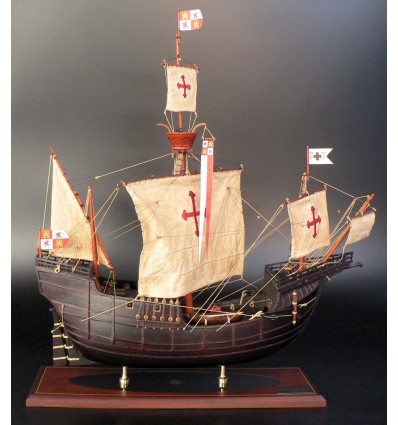 When, at the beginning of the summer of 1492, Christopher Columbus had the task of choosing three ships from out of all the boats along the coast of Andalusia, he knew very well what kind of ships he was looking for.

From 1477 to 1483, he had gone on long travels around the Atlantic and in Porto Santo he compiled documents that had belonged to his father-in-law, Bartolomé de Perestrello, who had for many years been the Governor of the Madeira Islands; he had also gathered information on the Great Portuguese Discoveries along the coast of Africa.

On the 3rd of August 1942 she left the Spanish harbour Palos de la Frontera bound for the Canary Islands together with the caravels "Pinta" and " Niña". Cristopher Colombus wrote in his "Book on the First Voyage "We sailed South with a strong wind until sunset for 60 miles, which are 15 leagues; then Southeast and South, a quarter by Southeast, which was the way to the Canaries, then...on the 12 of October the sailor Rodrigo de Triana made out land.

He left to reach the Indies, he finally discovered the New World..." The legend was born.