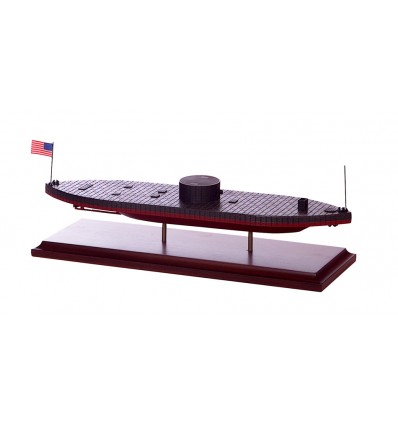 The model ships of the USS Monitor and the CSS Virginia, as a pair, are faithful scale models of the two contrasting adversaries in the first-ever battle between two ironclad warships: the battle of Hampton Roads, in 1862, during the American Civil War. These ironclads pre-date the final wave of merchant sailing ships, represented in the Abordage range by the tea clipper Cutty Sark, and the romance embodied in that model contrasts with the realism of what was to come, embodied in these twin models.

The model of the USS Monitor shows what was perhaps a still more radical design than even that of the CSS Virginia. Almost all of the ship was below the waterline, with just it’s iron-plated deck, revolutionary rotating gun turret, and a pilothouse above. The model bears witness to the fact that this was the world’s first semi-submersible ship, anticipating many features of future submarine design.

The laser etching in the model brings out the detail of the riveted iron-plate construction, innovative in construction technique in the original as well as design. Nine foundries shared the work, with the parts brought together to build the ship, and the whole process taking less than 120 days. This contrast in design and implementation of an ironclad warship in again brought out in the detail of the two models.

Other details to note in this model are designer John Ericsson’s novel marine screw, allowing the ship to be one of the first to use steam propulsion only.

These two carefully-reproduced ships, the USS Monitor and the CSS Virginia, show, side-by-side, the detail and contrast in the conception, design, and implementation of the protagonists in what was a huge leap forward in the technology of marine warfare, and represent a crucial turning point, coming midway between the major sea battles of Trafalgar and Jutland.

13 other products in the same category: