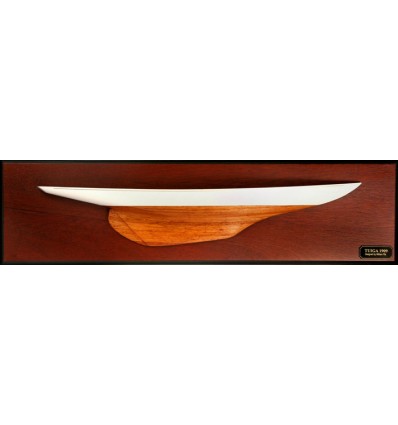 Designed by William Gardner, Launched 1903 in New-York. At the Turn of the Century, royalty dominated luxury yachting, and races were organized for the pleasure of the wealthiest yacht-owners. In 1905, 11 yachts are invited in Europe to race the Kaiser's Cup, offered by the German Kaiser Wilhelm II.

Among these luxury yachts, there was a three masted steam schooner Atlantic, 185' long and owned by Wilson Marshall, who would enter the legend of boating forever. Driven to the potential of her lean hull form and 18,500 square feet of sail by Captain Charlie Barr, on the seventh day of racing she logged a staggering 341 nautical miles . When she passed the warship marking the finish, she had crossed the ocean in 12 days, 4 hours, 1 minute and 19 seconds. This record would stand for more than 50 years!

Her second owner was Cornelius Vanderbilt. She lasted into the late 1970s. Too big and costly to properly maintain, she sank at her last mooring in tidewater Virginia. In 1997, the New-York Yacht Club hosted the Atlantic Challenge, race for large cruising yachts in Atlantic's memory.