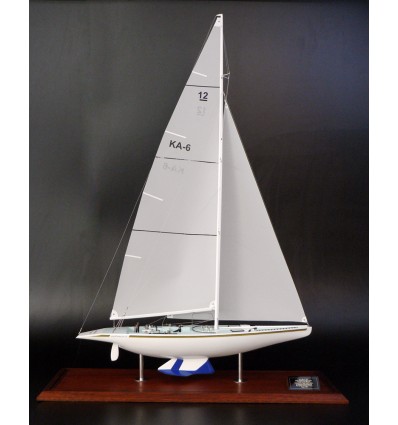 Buy this model of the Australia II which won the America's Cup in 1983.

Australia II (KA 6) is the Australian 12-metre-class America's Cup challenge racing yacht that was launched in 1982 and won the 1983 America's Cup for the Royal Perth Yacht Club.

Skippered by John Bertrand, she was the first successful Cup challenger, ending a 132-year tenure (with 26 successful defenses) by the New York Yacht Club.

Designed by Ben Lexcen, built by Steve Ward, owned by Alan Bond and helmed by John Bertrand. Lexcen's Australia II design featured a reduced waterline length and a short chord winged keel which gave the boat a significant advantage in maneuverability and heeling moment (lower ballast C of G) but was a significant disadvantage in choppy seas. The boat was also very quick in stays.The winged keel was a major design advance, and its legality was questioned by the New York Yacht Club.

During the summer of 1983, as selection trials took place for the Cup defence that autumn, the New York Yacht Club challenged the legality of the keel design. The controversy was decided in Australia II's favour. Australia II sported a number of other innovative features that contributed to her success, including radical vertical sail designs, all kevlar running rigging and a lightweight carbon fibre boom.

29 other products in the same category: