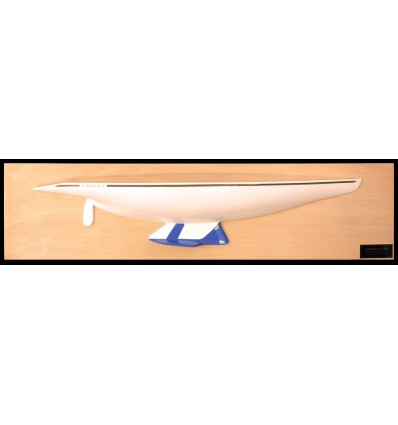 When he built the model of the schooner America in 1850, George Steers had no idea that he was entering the legend of the America’s Cup. When he designed the 12-Meter Australia in 1983, Ben Lexcen became a living legend in the history of yachting. From this point on, after Ben Lexcen, come what may, nothing will be the same again.

Ben Lexcen, the man who won the America’s Cup had upturned the approach to Twelve design, whilst many were they who thought the class outdated and obsolete, and this is where the genius of Ben Lexcen is the most fascinating, he dared. He dared to combine a conventional approach, tank testing, with an entirely avant-garde approach, computerized simulation and control, whilst leaving room for his intuition. He dared to re-designed a part  of a boat which everyone considered as complete as possible; the keel.

Finally, he dared to race Australia II. Audacity is still the trademark of Ben Lexcen, the man who won the Cup !