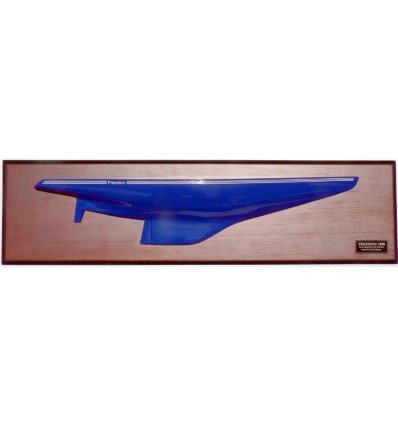 In 1980, Olin J. Stephens II was 72 years old. He had never been out of the limelight of naval architecture and had been a yacht designer for over half a century.

1980 was the year Olin J. Stephens chose to retire. But before leaving, he designed his last Twelve to defend the Cup, Freedom. Bill Langan assisted him in his work . Although there was nothing revolutionary about Freedom's hull, she was greatly inspired by the unfortunate Enterprise ( 1977 ), and was the result of in-depth research into reducing pitching and windage of the hull, giving one of the lowest in the water in 1980. Only one day was spent tank testing, with models of Enterprise and Freedom.

In the races, it was the professionalism of Dennis Conner that gained the upper hand. The pressure had never been so great after the outcome of the 1980 challenge. But the ever-elegant Olin Stephens was able to retire with dignity: out of eight Cup challenges since 1958, seven Twelves had come from Sparkman & Stephens !