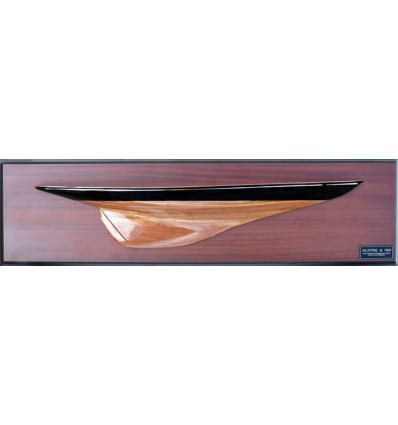 Six years after Thistle, George Lennox Watson found himself confronted with the America’s Cup again. He had earlier built Distant Shore, for Charles D. Rose, who should have run in the 1891 challenge, which was cancelled. Then, for the Prince of Wales ( the future Edward VII ), he designed Britannia ( 1893 ). Britannia was the most handsome yacht designed by G. L. Watson.

Forty years ahead of her time, her lines were forerunners of those of the J Class. He followed her very closely when he built Valkyrie II for Lord Dunraven, but she was a little narrower and lighter than her elder sister. In the races held in 1893 against Herreshoff’s defender, Vigilant, Valkyrie II proved very dangerous in light weather, even in heavy weather she was very fast and lacked very little to win a race.

George Lennox Watson did not have the opportunity to take his revenge when Vigilant came to England the next year to run against Valkyrie II. He was on board, when on the day of the race, Valkyrie II was rammed by Satanita and she sank in a few seconds. But the potential of the Watson boats could be estimated when Britannia regularly beat Vigilant. Watson had reached the peak of his art.