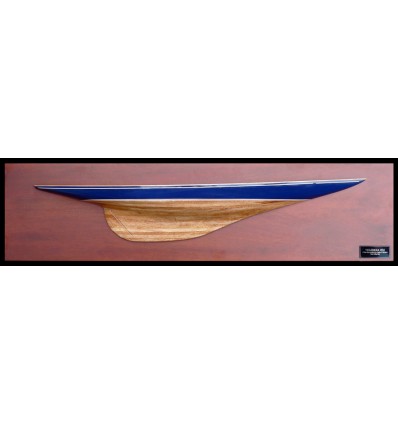 It had been a highly emotional meeting between Charles E.Nicholson and Nathanael Herreshoff during the Shamrock IV and Resolute measurement operations. The two men did not meet one another until ten years later due to the visit arranged by Harold Vanderbilt.

Nicholson built Shamrock V in 1930. Yet again, he was unable to equal the Americans. Although this time they did not have eight years' experience with the new International Rule, they were out in force; for the 1930 challenge they built 4 J Class. Charles Nicholson had only one chance to exploit the formula to the hull. Moreover the Americans made faster progress than the English with their yacht equipment. Shamrock V was not as fast as she was beautiful . The last challenge of Sir Thomas Lipton concluded with a disastrous defeat against Enterprise.

But his popularity in the United State was such that the public response to a subscription to award him a gold souvenir cup was massive. Overwhelmed, the ordinarily loquacious gentleman was scarcely able to utter a few words, "Although I have always lost, you make me think I have won. But I will try again, yes, I will try again!". "Tommy", as he was affectionately known, was never to keep his promise. He died on October 2nd, 1931, a few months after finally being admitted as a member of the Royal Yacht Squadron.

Sixty years later, Shamrock V was still sailing under an italian flag, having been re-christened Quadrifoglio. She was repurchased in 1986 by the Thomas Lipton Company, given back her original name and is now the property of the Newport Museum of  Yachting, founded by the Company.

Finally Shamrock V has been refitted by the famous yachtlady Elizabeth Meyer and is sailing worldwide for races and charter. One of her recent greatest victory was during the 1999 Antigua Classic Yacht Regatta, where she raced against  2 other remaining J Boats, Endeavour and Velsheda.