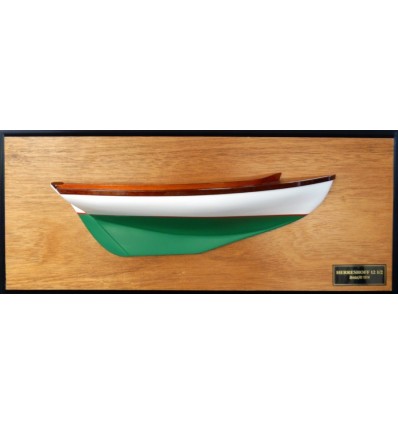 The Herreshoff 12 ½ is a sailboat that is typically owned by shore-dwelling summer folks in Maine, and for good reason. Beautiful, roomy, seaworthy and sweet-sailing, they are the perfect boat to send the kids off for the day without worry. Many are those who learned to sail in a 12 ½ (often called a Bullseye in Maine), and many are the yachtsmen who, perhaps having parted with a larger boat, sail them for the remainder of their sailing lives.

The hull is white with a red waterline and dark green bottom paint.

With over 2000 hulls built, Nathanael Greene Herreshoff’s 1914 design for a “Buzzards Bay Boys Boat” – the Herreshoff 12 ½ – has been in production for 113 years and is likely the most popular small yacht ever. Versions include a fiberglass redesign – the Bullseye, from Cape Cod Shipbuilding; exact fiberglass replicas like William Harding’s Doughdish, and Joel White’s Haven 12 ½ – a centerboard design built to sail shallower water. Uncounted copies from custom wooden boat builders also testify to its appeal.

With a 12 ½ foot waterline, the H 12 ½ is16 feet long. Proposed as a children’s training boat, it handled the choppy seas and brisk breezes of Massachusetts’ Buzzards Bay with an easy motion and a comforting sense of security. The design is informed by Captain Nat’s critical, innovative eye and long experience building trophy winning sailing yachts. By 1914 he was in his mid-sixties and drawing some of his best-loved designs – the Buzzards Bay 25s, Newport 29s and his own Alerion. Instead of rule-stretching high speed sleds his pen now drew human sized, sweet-sailing and uncomplicated boats that spoke of his deep appreciation for the arts of sailing and naval design.

Herreshoff gave the H 12 ½ a short ballast keel for stability and a deep, spacious cockpit to carry multiple kids and/or adults. Sold initially with a gaff and later with a Marconi rig, the sail area is small enough to be handily managed by a boy or girl – steel biceps not required. In experienced hands, however, the rig is big enough to slip along with a bit of a bone in her teeth. Adults have been known to downsize from trophy yacht to H 12 ½ just to relish casual sunset sailing into their golden years. It’s ironic that no one alive sailed on Captain Nat’s masterpiece, Reliance – a brilliantly engineered, extreme racer – but thousands have memories of sailing his “children’s” boat.

Particularly popular in Southern New England, H 12 ½ s are found all along North America’s Atlantic coast. In some families they’re handed down through generations, and rarely is one in need of repair not rescued and relaunched. Surprisingly, they have also traveled quite far afield: they sail in Norway, New Zealand, Saudi Arabia and many countries far from Bristol, RI. The H 12 ½ truly has a hull shape and history for the ages.