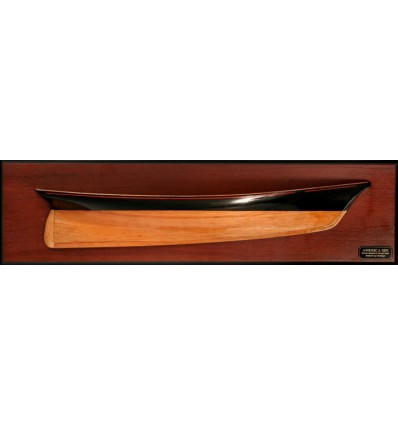 At the beginning of 1851, Sir Henry Bulwer, British Ambassador to the United States, saw an incredible boat under construction at William Brown's. On his return to England, he mentioned her to his friends, and the Earl of Wilton, Commodore of the Royal Yacht Squadron wrote to his counterpart at NYYC to invite him to Cowes. Comodore Stevens' reply was clear. Of course he accepted the invitation and declared himself ready to measure his boat  America against the best English boats.

On her arrival at Le Havre, America was joined by John Stevens, his brother Edwin and Colonel James Hamilton. On their visit to Paris, they were warned by the United States Ambassador to Paris, William Rives, and the editor of the "New York Tribune" that the risk of a beating by the English was high, and during the Universal Exhibition period, a defeat would be humiliating for The United States.

At her arrival America was met early in the morning by the brand new Squadron fleet cutter, Laverock. Laverock was obviously spoiling for a race with the Americans! They finally gave in and accepted the invitation to race to Cowes, six miles away. Ashore all eyes were fixed on the two yachts. When the schooner anchored off  The Castel, Laverock was still at third of a mile behind. The energetic John C. Stevens had scored a point for prestige, but had lost all chance of winning money by racing America at Cowes.

At the last minute on August 16th, John C. Stevens entered the schooner  America in the  "RYS £ 100 Cup", open to yachts belonging to clubs of all nations, and which would be held on August 22nd. 1851.

It was 17.50 when America rounded the Needles lighthouse to the acclaim of the spectators. Half an hour later, no one pursuer had yet pointed her stern round the Needles. There was no doubt as to the outcome of the race, and the steamers headed flat out for Cowes to see the finish, to the astonishment of the spectators waiting on the quaysides. They asked, "Is America first" - "Yes" - "Who is second" - " No-one!".

On the same day, the Squadron commodore, the Earl of Wilton, officially handed over the "RYS £100  Cup" to John Cox Stevens, Commodore of the New York Yacht Club and the owner of America.

A legend was born...