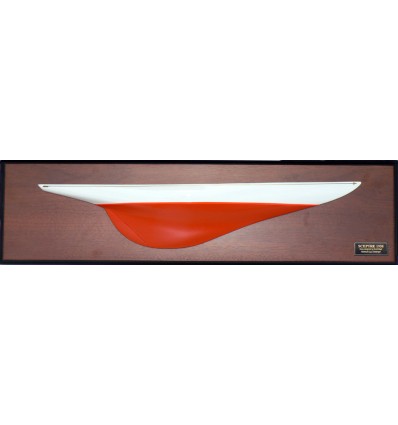 Scotsman David Boyd was 55 years old when he designed Sceptre. He was at the time, managing director of the Robertson & Son yard at Sandbank, Argyll, Scotland, and had been so for 33 years. He had a sense of esthetic and his first major design, the 34-ton yawl Zigeuner was living proof.

In 1957, Boyd was selected to design the challenger at the issue of a competition in January, in which three of his fellow-designers were competing: James Mac-Gruer, Arthur Robb and Charles Nicholson Junior. The principle of the competition was interesting; each of the architects was to submit two designs: one conventional, the other more original.

On July 13th, 1957, David Boyd’s model B was picked. Astonishingly enough, following the comparison, no effort was made in order to continue to improve the performances of the model picked. Time was short, true, and the lesson inflicted by Columbia was harsh.