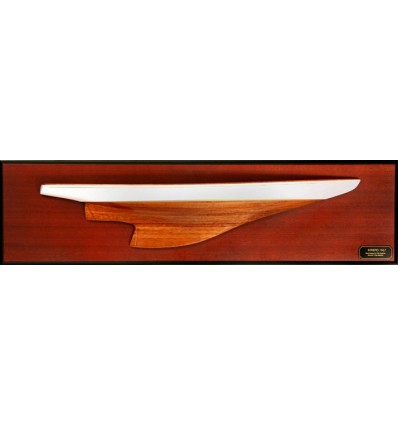 When after the 1964 races observers were able to examine the lines of Constellation in detail, they thought that the end of 12 Meters was nigh. It seemed difficult to go any further, to do any better, or even innovate. They had not reckoned with the creative genius of Olin Stephens: in 1967, Intrepid brought revolution to the world of Twelve !

Assisted  by Mario Tarabocchia, Olin Stephens designed a boat with numerous innovations: the rudder was separate from the keel and the trimtab flush with the keel appeared. This increased the keel resistance giving extra lift to windward; used with the rudder, it improved the yacht’s handling capacity. The appearance of the skeg or bustle between the keel and the rudder provided the assembly with a high degree of stability. Finally, the winches and running rigging were put under the deck.

The Stephens / Mosbacher tandem performed miracles. In 1967, Intrepid was untouchable. She dominated the American selection trials and trounced Dame Pattie, the challenger, taking 11 seconds a mile out of her. The Intrepid concept was decisive in the design of Twelves to date, and is a turning point.