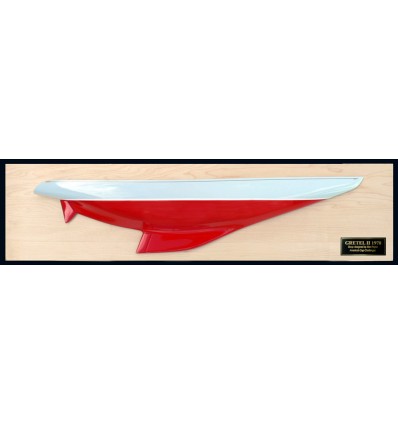 Alan Payne indisputably held all of the aces when Sir Frank Packer commissioned Gretel from him in 1959-60. He made a very thorough study of Vim, and also made two trips to the United States, including one to test the models made from the drawings.He was seconded in his works by the young Australian architect, Warwick Hood, and the draughtsman Alfred Lean.

The experience acquired was invaluable, and after the warning shot from Gretel, the Americans withdrew the facilities they have made available to Alan Payne. But Payne was unable to improve Gretel's performance in the 1967 challenge. Fully re-designed, his boat was beaten by Warwick Hood's Dame Pattie.

But the defeat did not discourage Alan Payne. Alan went back to work in 1969 and excelled himself with the design of Gretel II. In fact, the general opinion was that Alan Payne had produced a boat that could have lifted the America's Cup from the Intrepid re-built by Britton Chance.

The failure was due to crew's lack of training, and the fact that the Australians were unaware of the real speed potential of their boat. With Gretel II, Alan Payne reached the state of his art.