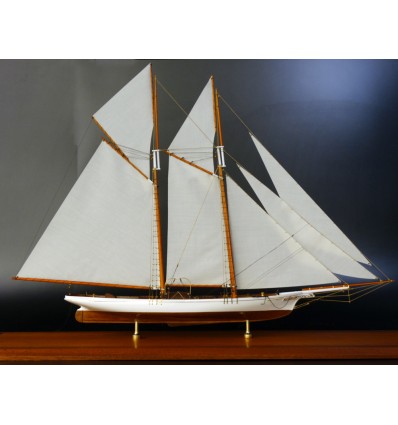 The Columbia 1871 is a trully work of art. Plank on bulkhead construction, we only build small production batch of 10 units. Exclusive hand made construction, it has been built from the the best wood essences and innovative materials. This model of Columbia combines the careful execution of every detail with the high quality of the materials and the craftsmanship. Deck fittings are amazing and very detailed. Model has white topsides, gold cove stripe and varnished stained wood bottom. Model comes with cotton sails and is ready to display.

Columbia was one of the two yachts to successfully defend the second America's Cup race in 1871 against English challenger Livonia.

Design:Columbia was a wooden centerboard schooner designed and built in 1871 by Joseph B. Van Deusen in Chester, PA for owner Franklin Osgood of the New York Yacht Club.

Career: Skippered by Andrew J. Comstock, Columbia won the first two 1871 best-of-seven races against Livonia. She was beaten by Livonia in the third race, in which Columbia, damaged from the second race, was skippered by Horatio Nelson "Nelse" Comstock. She was the first America's Cup defender to concede a win to the challenger. As Columbia was further damaged in this third race, she was unable to compete in the final races. The yacht Sappho substituted and won the America's Cup for the second time for the U.S. Columbia ended her racing career in 1908, when she was dismasted and used as a houseboat in Brooklyn Harbor on the East River. Three years later she was rebuilt and sailed as a cruiser out of Newport News, VA. In 1920, Columbia was bought by a fisherman. She was declared lost in 1923.

29 other products in the same category: